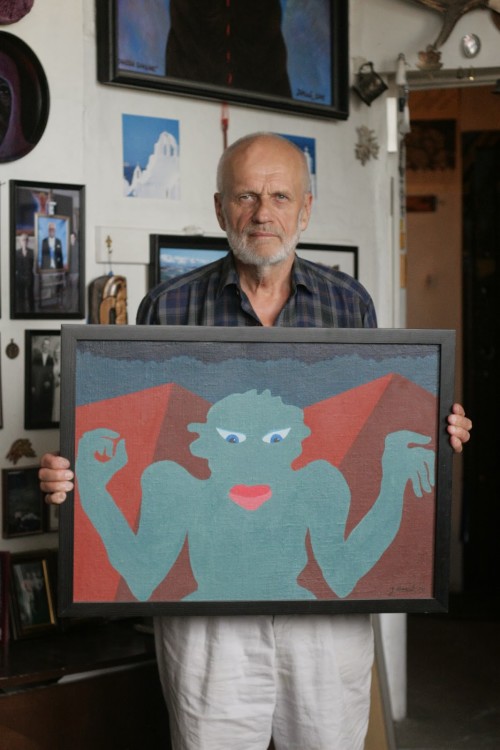 I first came across the work of Estonian artist Jüri Arrak through friends of Kuriosas 50 Watts in the US who unearth all kinds of beautiful and crazed book illustrations from around the globe.

These images of Arrak’s children book from 1975 entitled Panga-Rehe Jutud (The Swamp Ladies of Estonia) left me completely spellbound with their 70’s psychedelic glory. 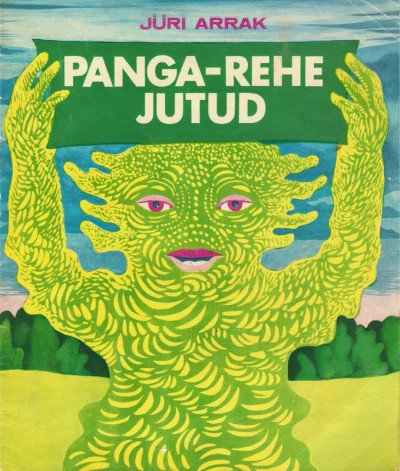 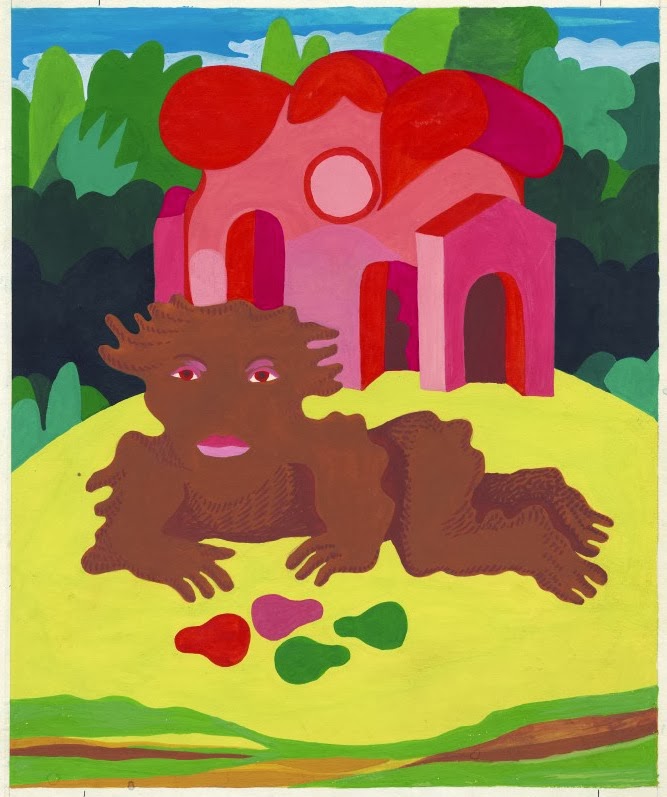 With two days left in Tallinn, it occurred to me that Jüri could still be alive, and perhaps based in the city, maybe still even creating these creatures.  After a bit of research I found he was indeed still around, and actually very highly revered, having recently been commissioned to paint the Estonian president’s portrait.

I emailed the tourist office late at night on a whim and to my suprise, they sent over his phone number the next day at 6am.  At this point I felt I had no choice but to pursue the trail so I dialled it, apprehensively, with no idea what to find.  Happily, after a few rings a merry sounding voice answered; we muddled through the language barrier, I tried and failed to describe my blog and he finally asked if I wanted to visit his studio later that afternoon.  Already cheered by his description of his diary as his ‘paper brain’ and massively intrigued about meeting him, I paced around the city in anticipation with thoughts whirring; willing the day to pass and wondering, based on his psychedelic artwork, what the hell this studio was going to look like.

At 5pm I lingered slightly tentatively near the Soviet era cinema I’d been directed to, admiring the typography of KOSMOS and stark exterior as a way of distracting myself 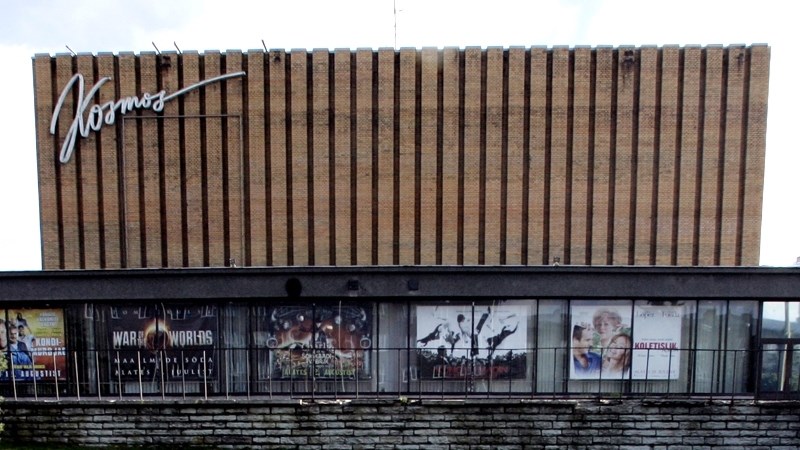 A lofty smiling man approached and I realised it was Jüri, he immediately hugged me and seemed entertained by my age, laughing that I could be his granddaughter.  I was instantly struck by how youthful and vibrant he seemed, he somehow didn’t fit the mould of a pensioner.  We then walked up to the top floor of an aging nearby apartment block, heading to the studio he has kept since the late 1970’s.  Now 77, Jüri told me with relish how he climbs the 110 steps to his studio at least 3 times every day (in fact I embarrassingly struggled to keep pace with him as he scampered up them)

At the top, I did wonder what his next door neighbours must make of him upon seeing his front door 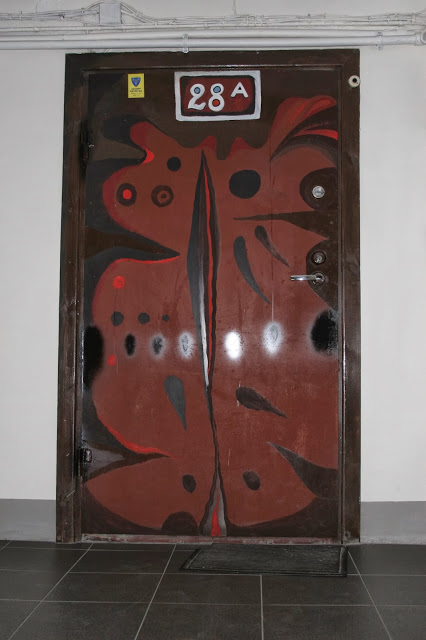 Once inside it was almost like entering a cave; religious artifacts, photographs, paintings, sculptures, books, old artifacts, archives, masks, keepsakes; an eclectic topsy turvy haven yet also, I sensed, a meticulously run operation. 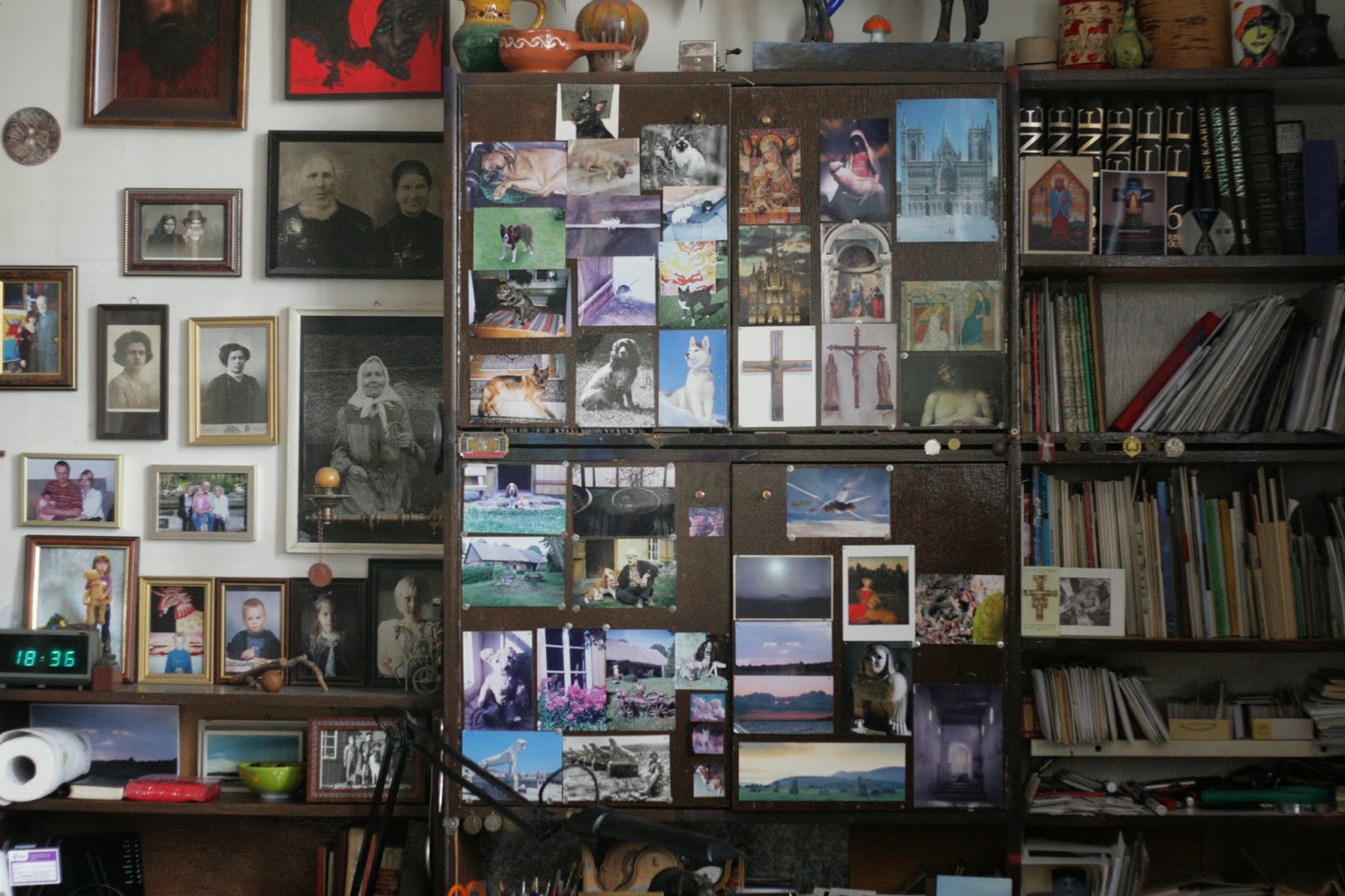 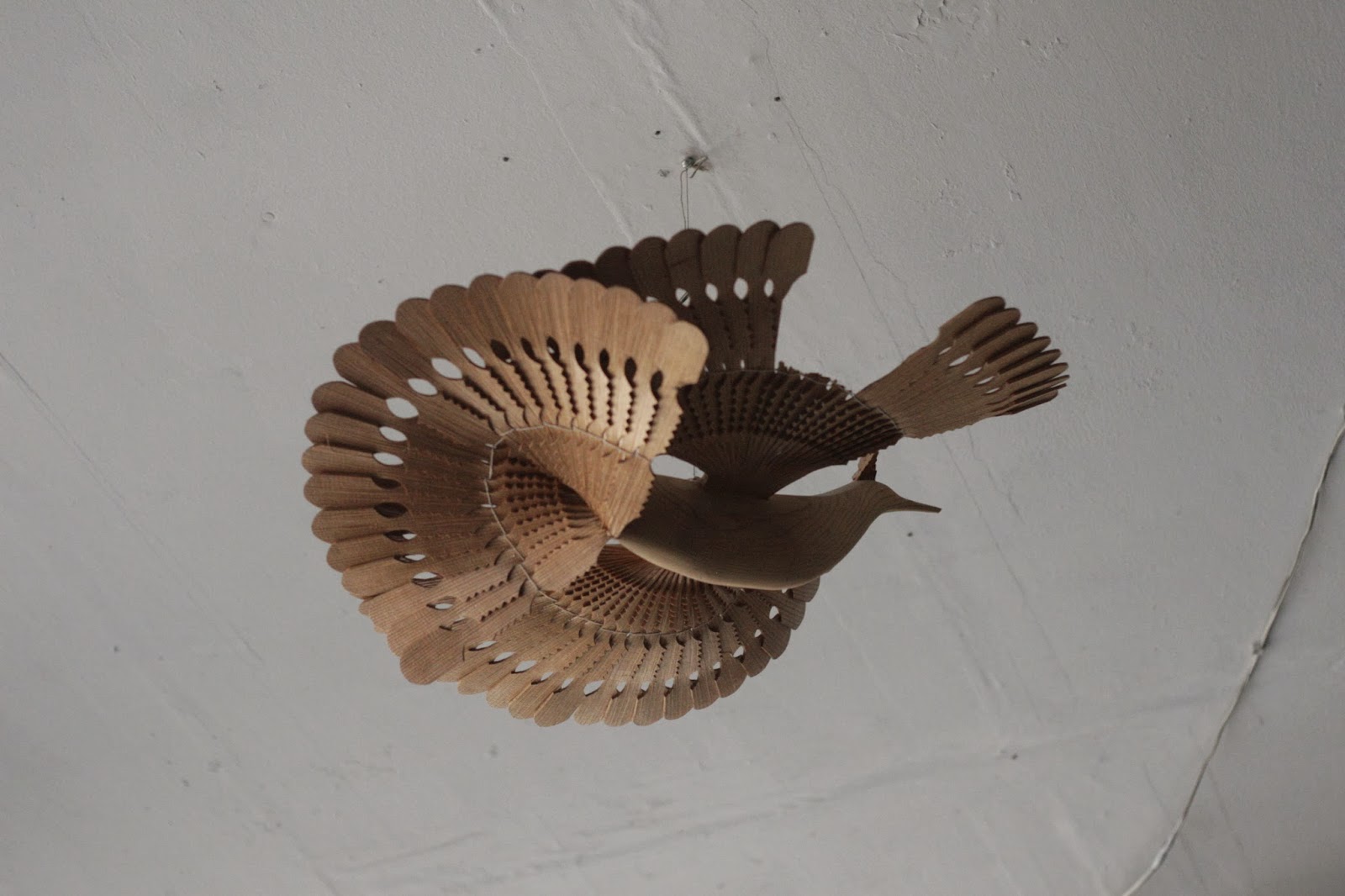 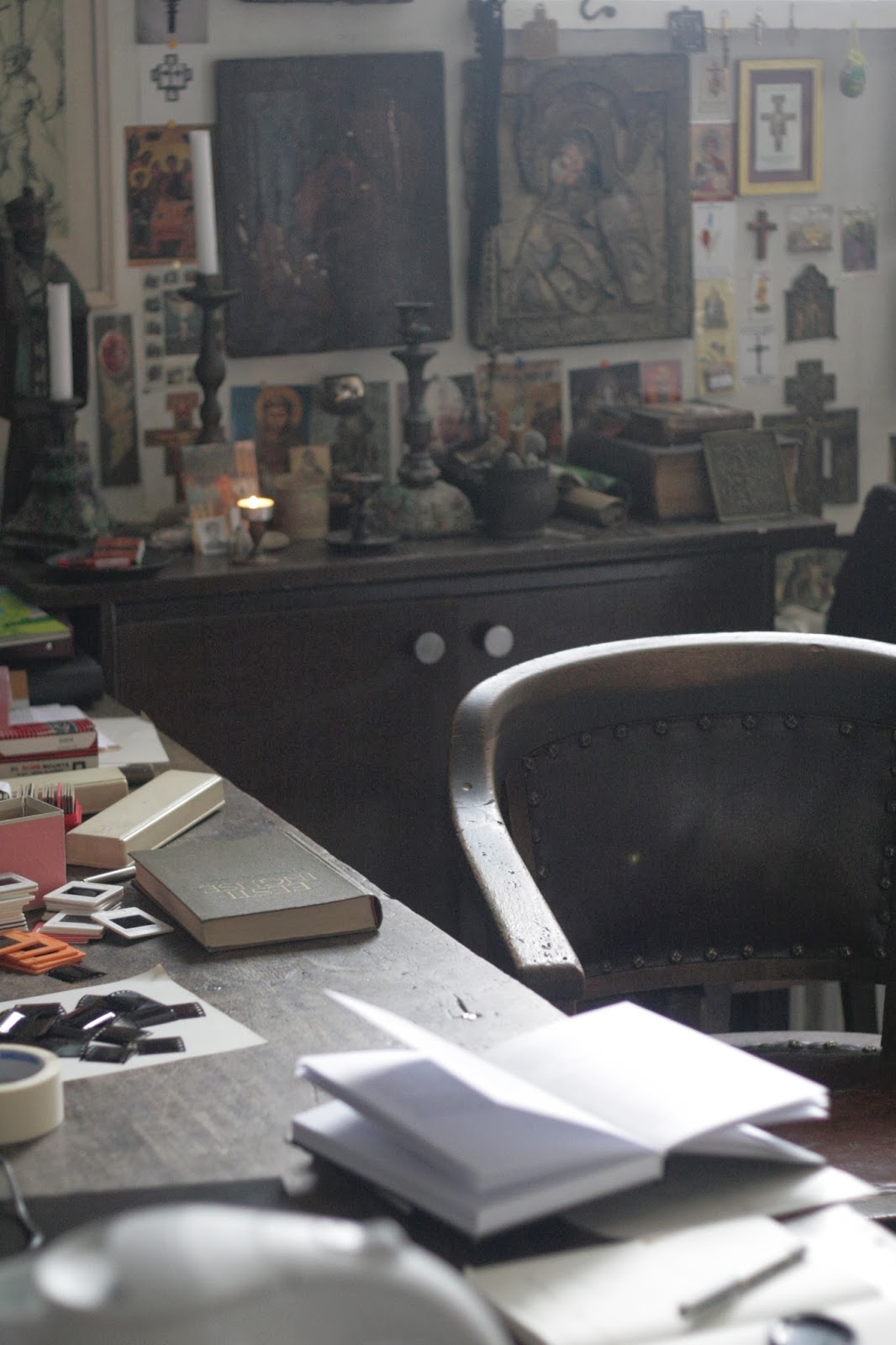 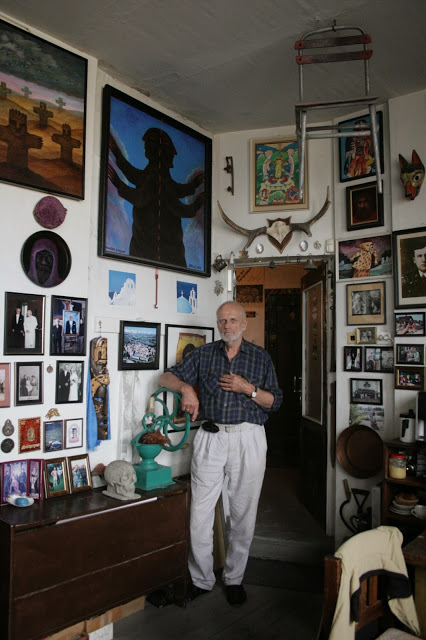 Sitting at his desk together, he asked me if it was okay if he kept on organising his slides as we chatted.  I obliged as I found his industriousness amusing, and we started to talk about how he first became an artist.

Born in 1936 in Tallinn (back then in the Soviet Union), he told me how he was sent to Leningrad (now Saint Petersburg) for the army from 1955 until 1958.  Following this he stayed on in the city and became a taxi driver.  Frequently corresponding with his brother back in Tallinn studying art,  Jüri received regular advice and encouragement from his sibling who urged him to try drawing and taught him via letters, step by step “how to draw Picassos.”  Quickly developing a passion for art,  Jüri was spurred to return to Tallinn and enrolled at the  in 1961, studying Metal Art at the Estonian State Art Institute for the next five years.

Alongside other students from the Institute, and inspired by the pioneering artists they had discovered such as Kandinsky (which must have been tricky, since the Soviet Union had banned abstract art) Jüri formed a group called ANK ’64 who were the first group in the Soviet Union against the style of Socialist Realism; at the time the only permitted artform.  This must have seemed incredibly radical and risky given the strict climate they were operating in at the time, but perhaps it was inevitable that the growing spirit of dissidence in the West at the time started to filter through on some level. 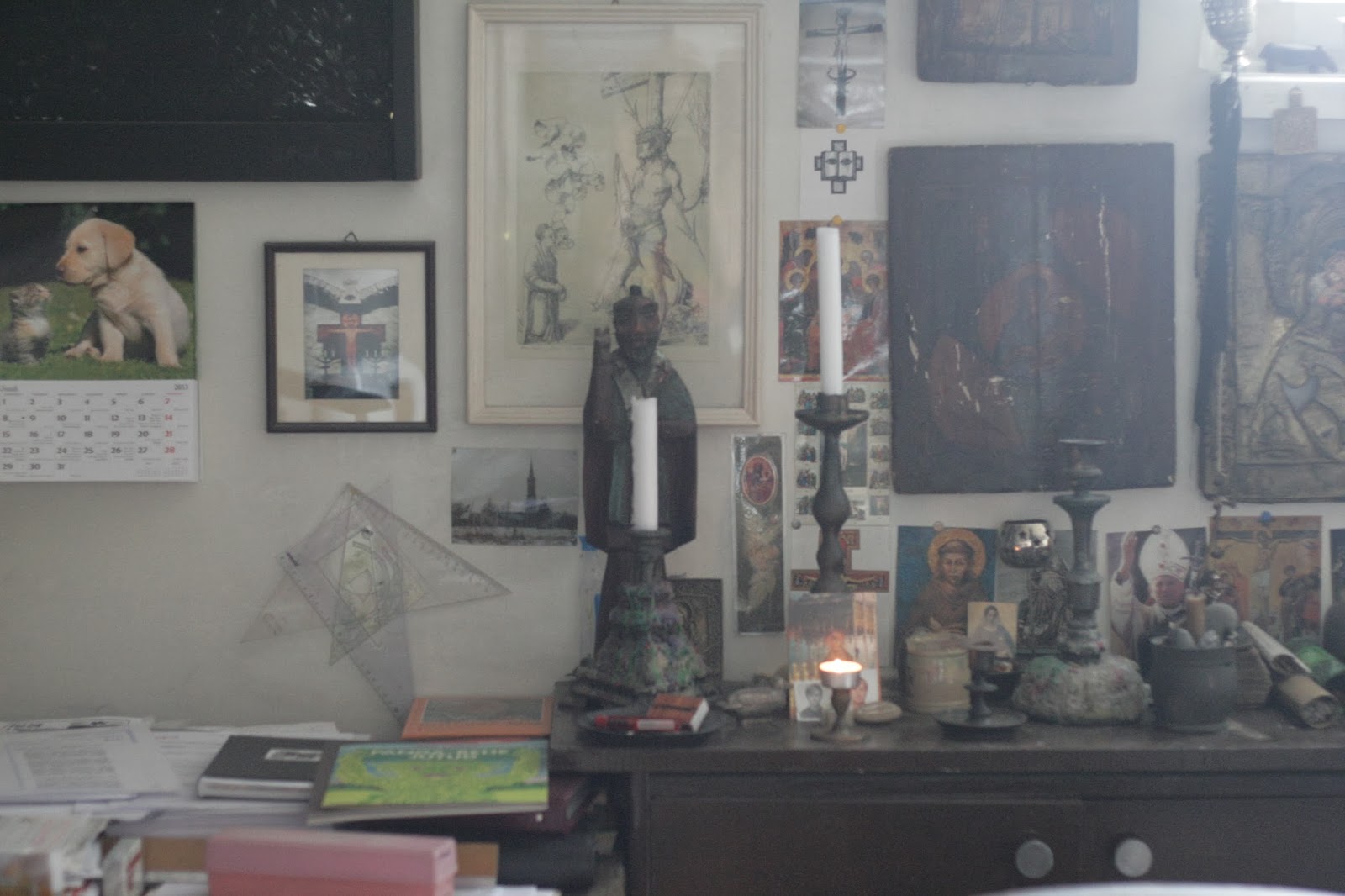 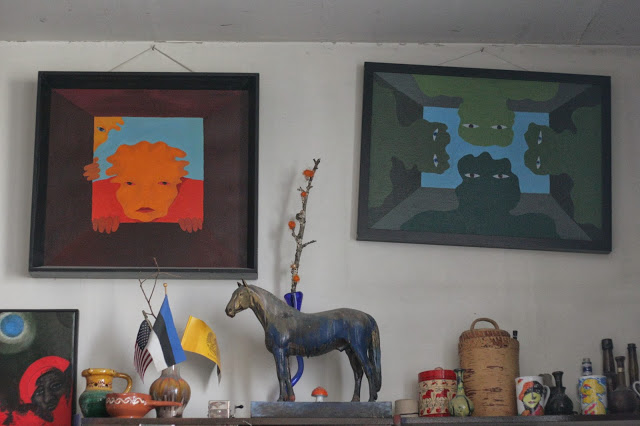 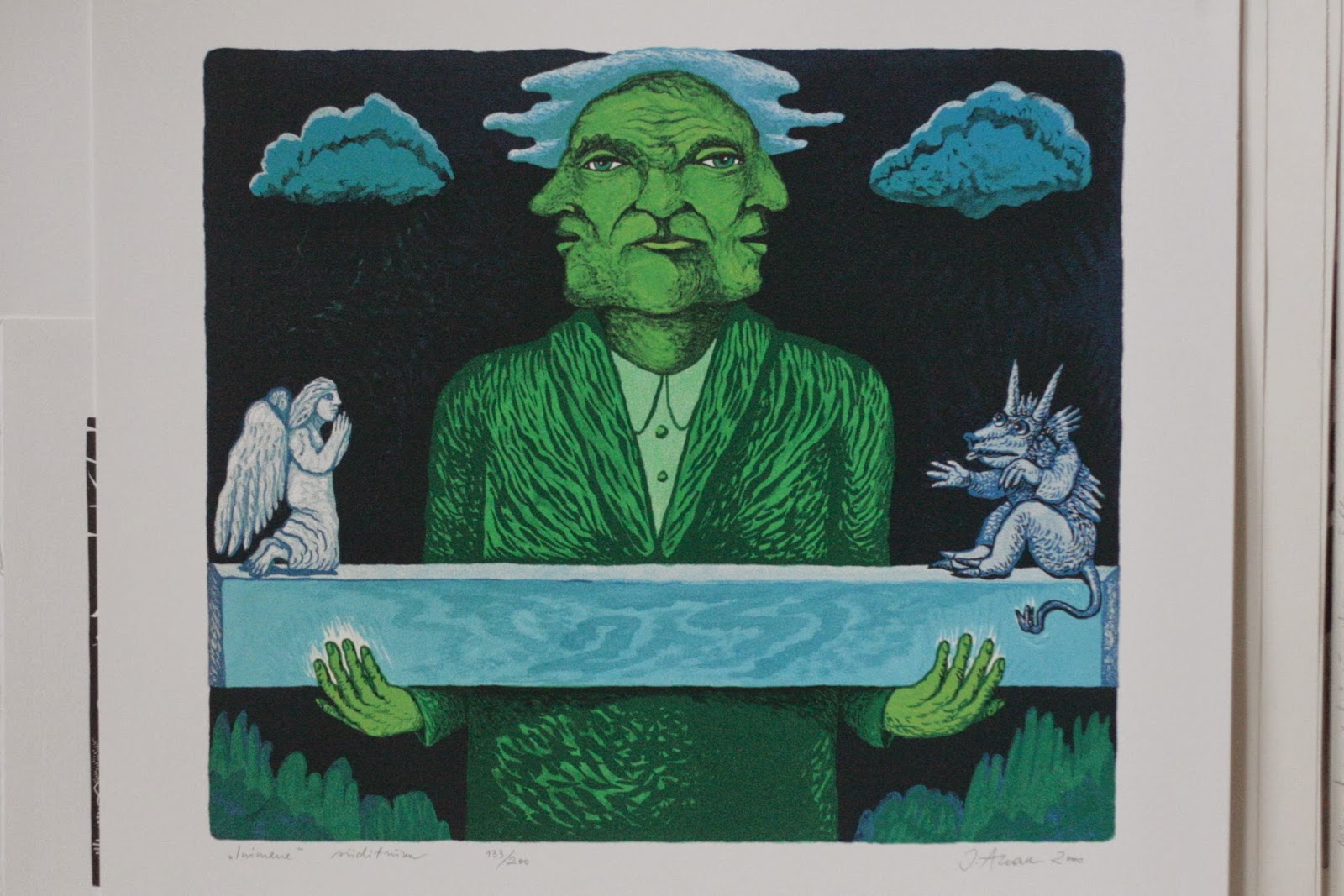 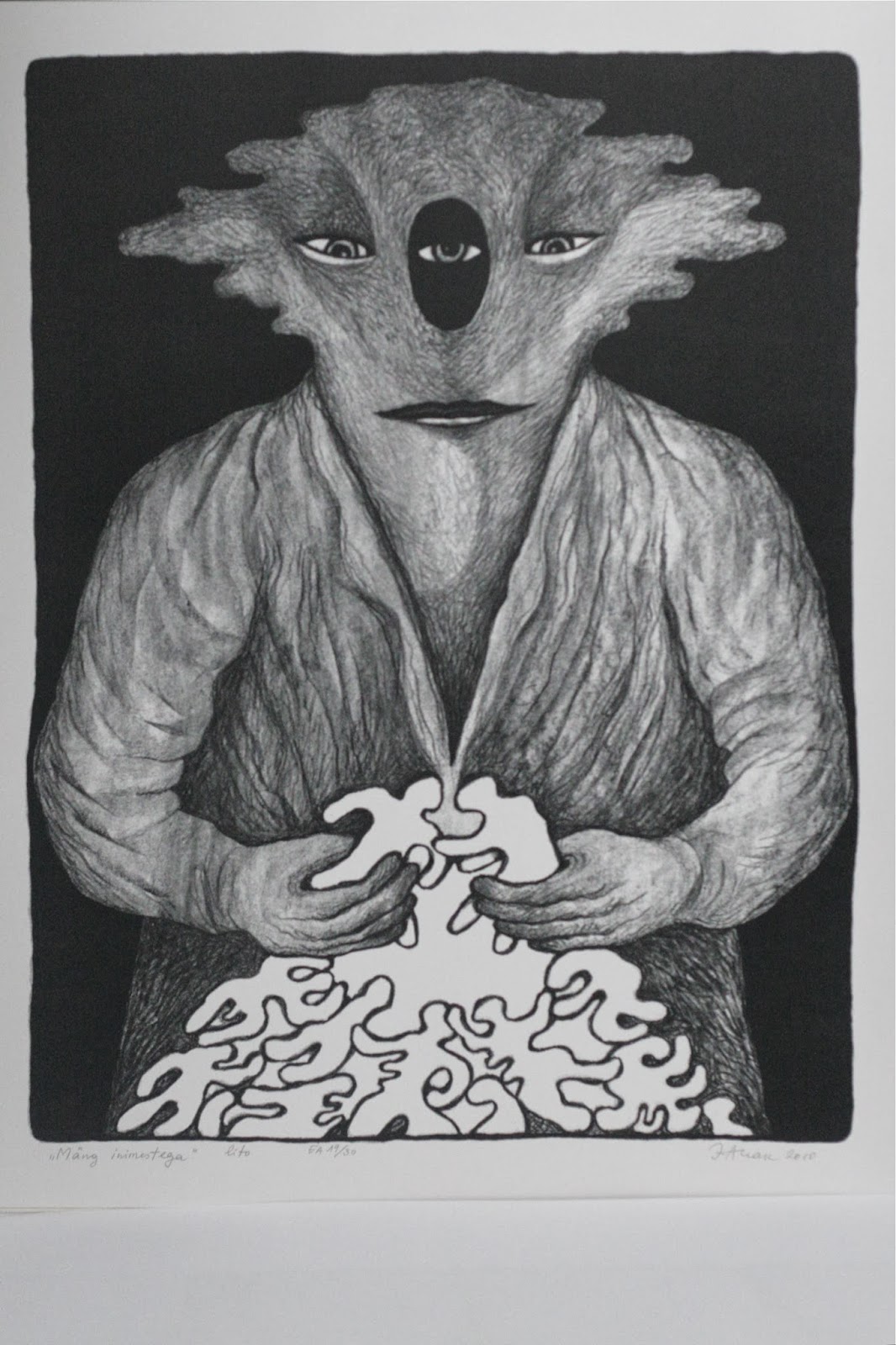 Upon leaving college, he made jewellery and then also started making miniature paintings.

When asked about his other influences, Jüri answered without hesitation, “The Surrealists” and mentioned artists like Magritte.  This strand of influence in his work seemed very clear to me in this very early painting he showed me.  He told me liked paintings with doors, as they act as “windows to other worlds.” 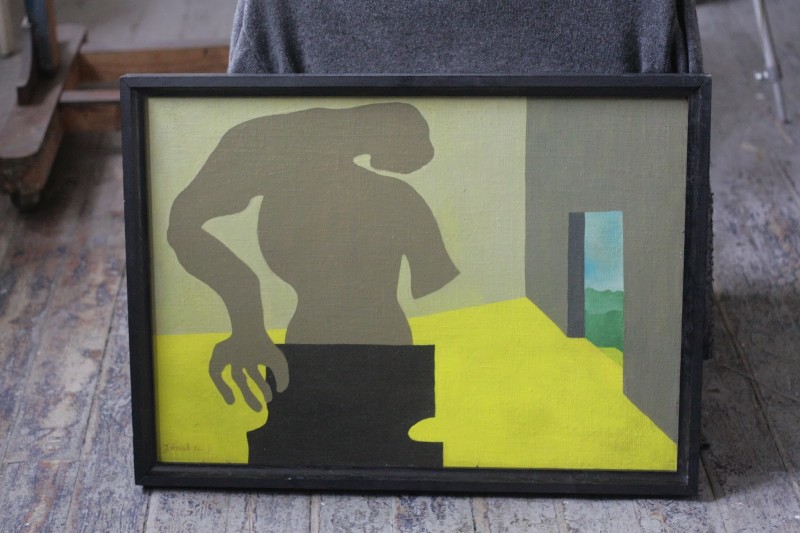 Jüri joined the Graphic Art society in the Soviet Union in the late 60’s, providing him with the only chance of ever having an exhibition since art shows were only permitted through membership of such groups.

In 1970, the society offered him an exhibition based on their knowledge of his practice as a metal worker.  Jüri then daringly chose to exhibit his abstract paintings instead. 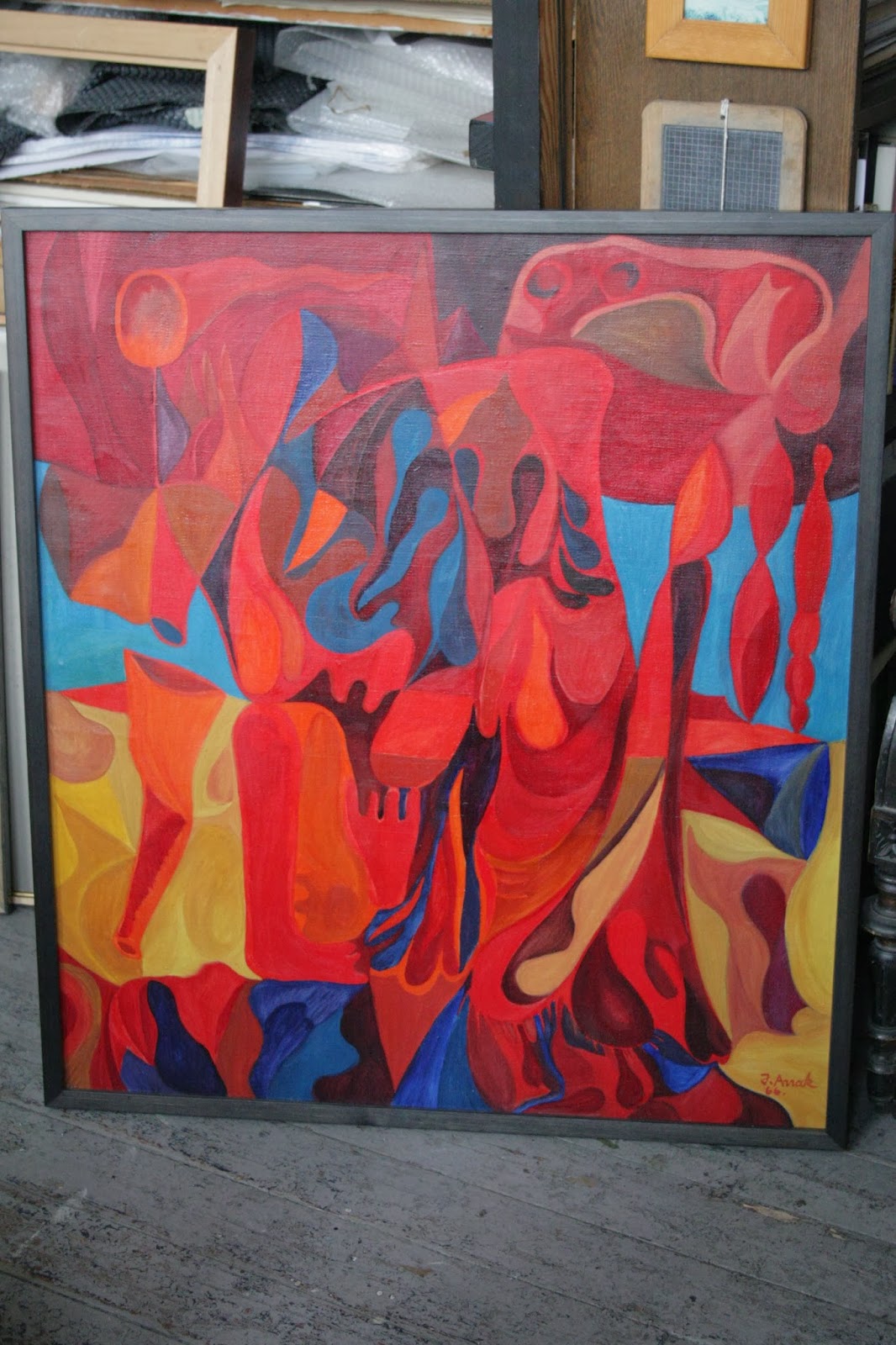 Since it was at the last minute it all still went ahead, but he was reprimanded by the head of the society, stunned at this apparent artistic turnaround and obviously worried by the stark discordance to ‘acceptable’ aesthetics these paintings posed.  Jüri told me how he placated the head by saying he was ‘just a decorative artist,’ cleverly convincing the society that this radically different, challenging and unfamiliar artistic style was completely benign and for the sole purpose of adornment.

I was left feeling quite affected by this tale, realising just how trying it must have been to have had any freedom as a creator of any artistic works in such a climate of censorship and suppresion, but also thoroughly impressed at Jüri’s obvious abundance of chutzpah to attempt something so risky and subversive. 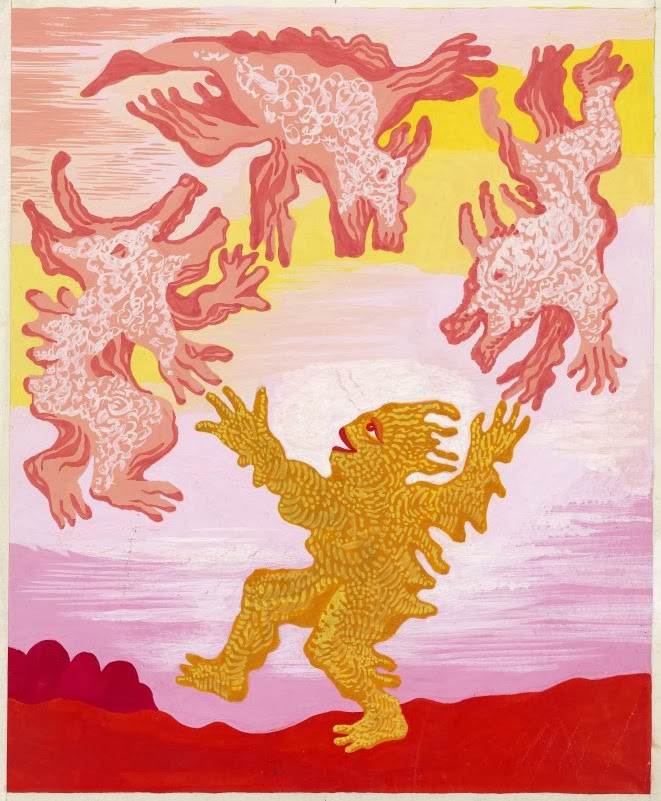 Jüri’s work moved on to the development of characters in the 1970’s.  He likened his creating of these characters to “like handwriting” since they have such a signature and consistent style, and come so naturally to him.

When we talked more about his work, he explained that he wasn’t drawn to still life or landscapes, for him, creating characters helped him feel closer to human beings, “I like people!” he exclaimed. 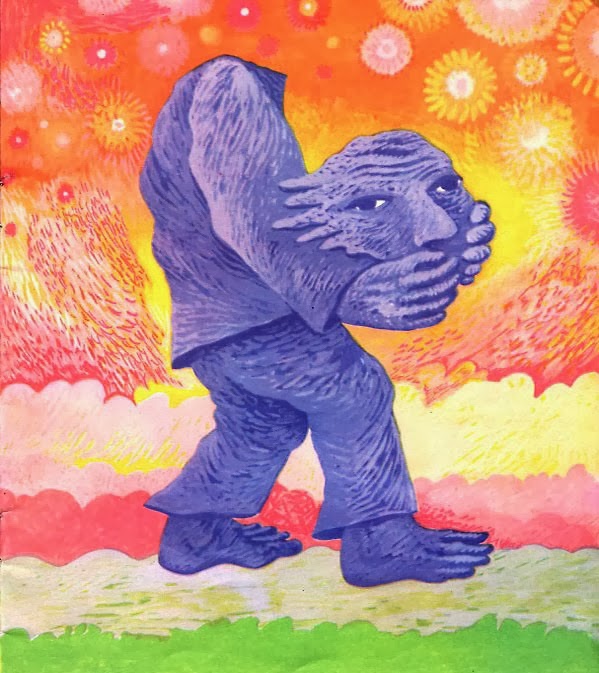 In 1975, he was commissioned to create the Panga-Rehe Jutud children’s book, which had a print run of 40,000.  To keep the powers that be happy, he insisted that the psychedelic story was ‘just meant to be a dream,’ again, just a whimsical, unthreatening creation, and nothing to concern them. 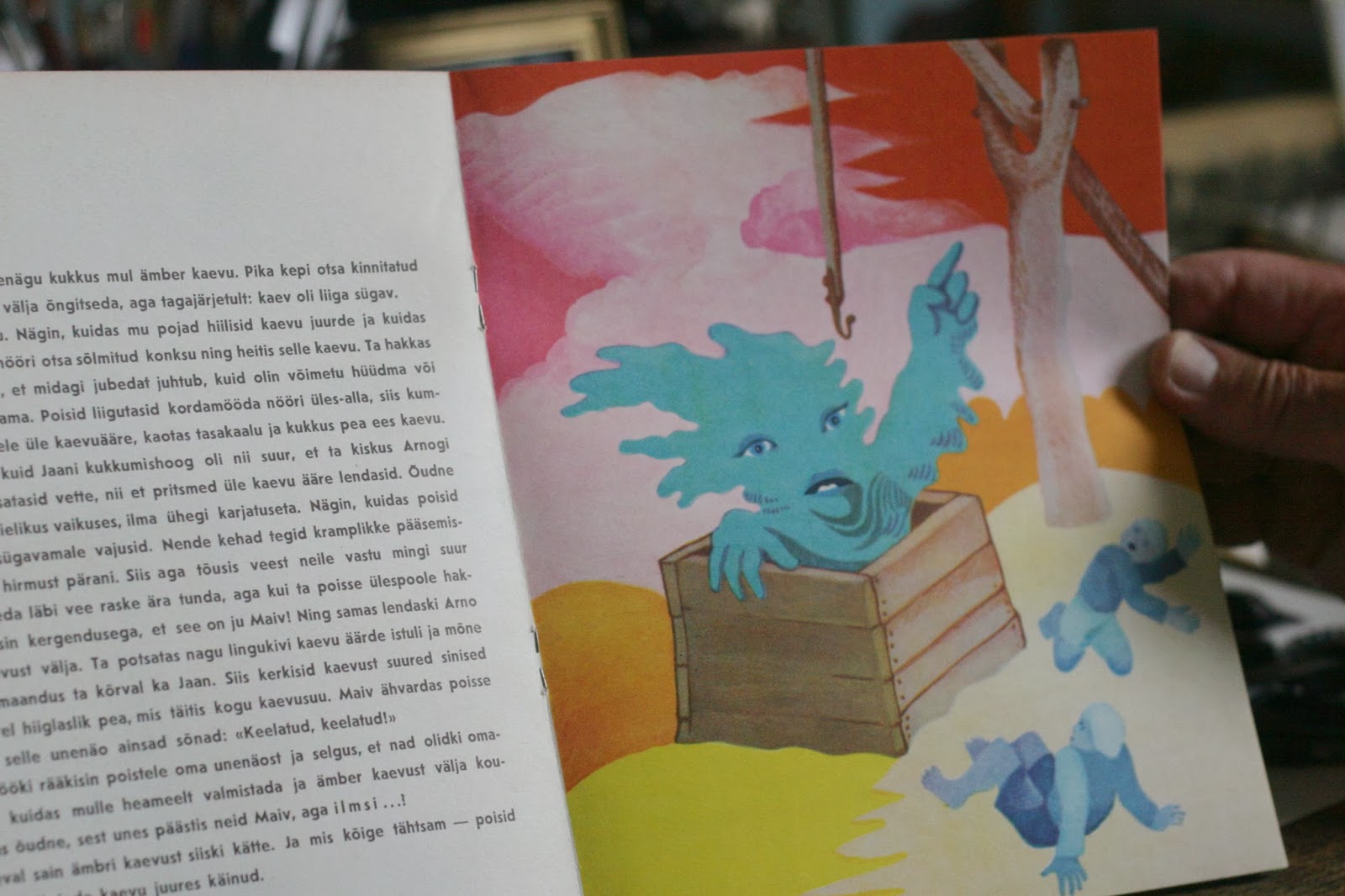 He told me he painted the pictures using gouache and that were all produced at actual size – the book being around an A5 format.

It interested me that some of Jüri’s work seemed to reflect the pagan roots that are still apparent in the Baltic regions through their Midsummer celebrations, beliefs I was intrigued to learn still live on in Estonian pagan religions such as Maausk (despite Estonia apparently being the least religious country in the world).  It also clearly draws on mythology abundant in both the Baltics and Scandinavia centring around the existence of trolls.  All religion would have been suppressed in Soviet times but it’s intriguing how these ancient belief systems and underlying affinity with nature were still seemingly having a subtle (or not so subtle, looking at the image below) influence on creativity. 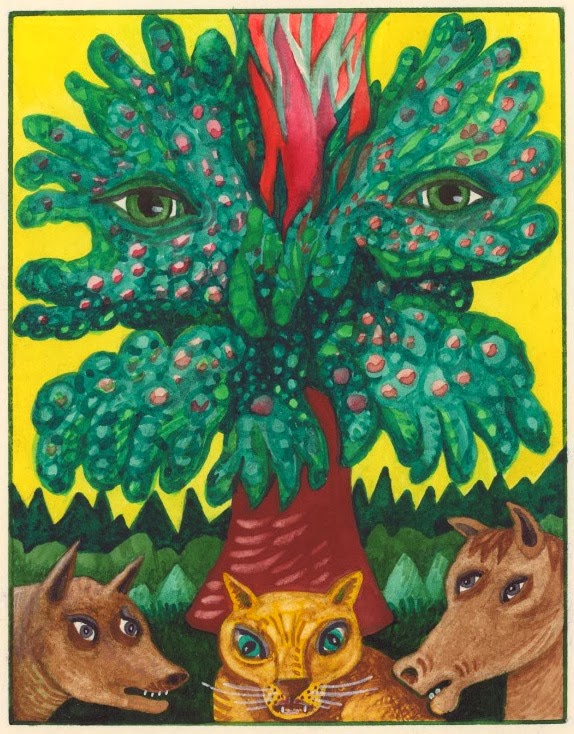 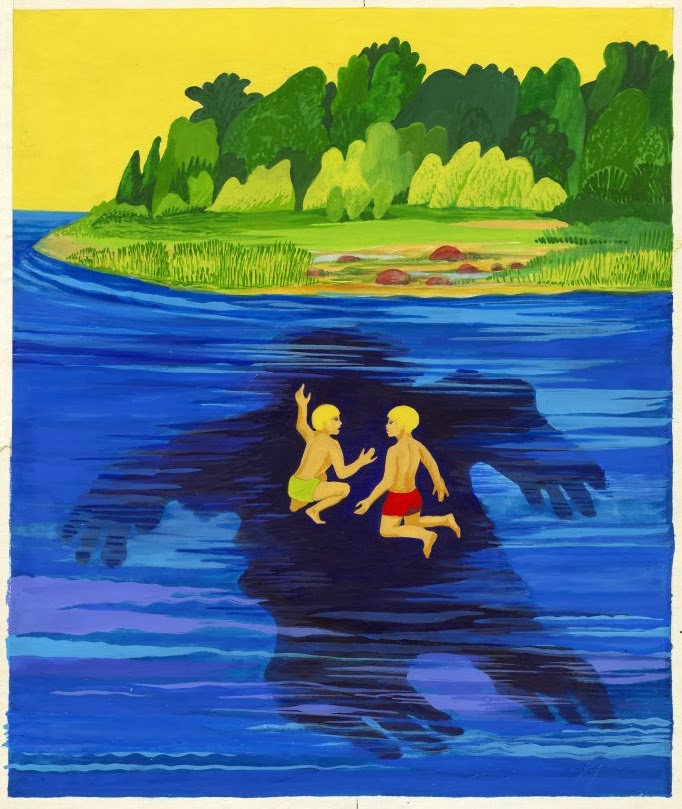 Jüri also showed me his one animation Suur Toll, made in 1980 and based on Estonian mythological figure Toell the Great a giant hero who lived on the Estonian island of Saaremaa in the Baltic sea.

It took him a year to complete and he revealed, unsuprisingly, that it was very hard work.  The 16 minute film is here and well worth a watch if you can locate it, it’s fantastic to watch his creations move and there are some really very far out visuals and inventive character design that make it hard to compare with much else.

He also released a second children’s book by the same name, Suur Toll, in 1982 which he showed me the original copy of too – with creatures in far more aggressive looking incarnations than his previous tripped out publication 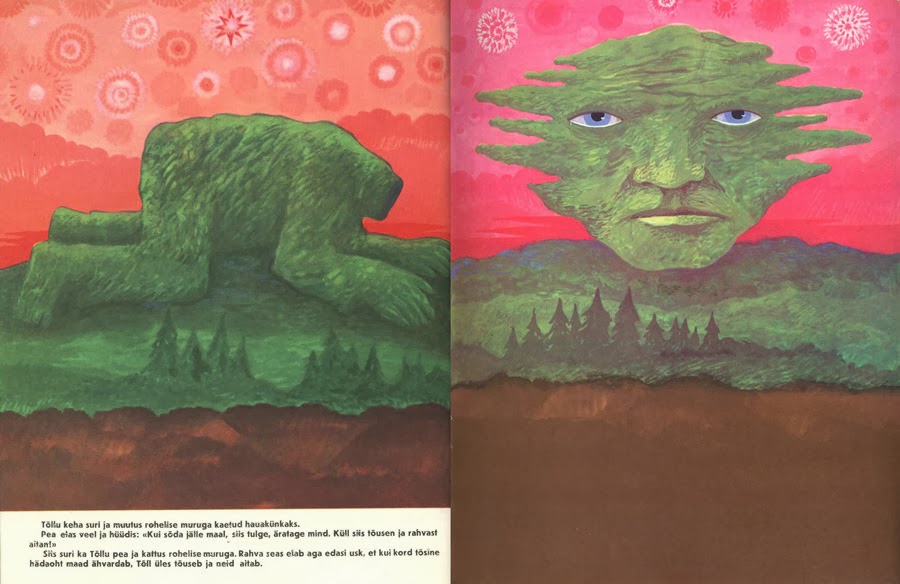 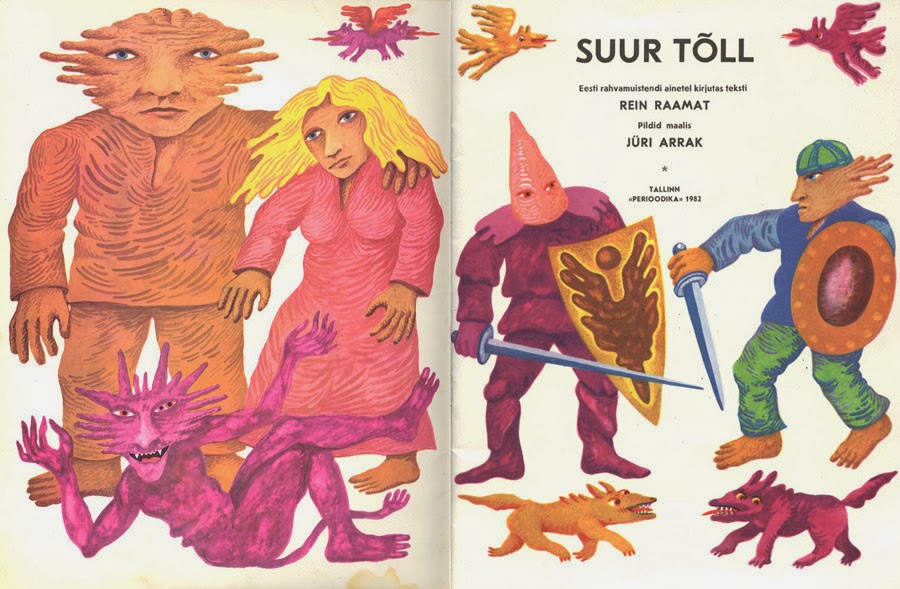 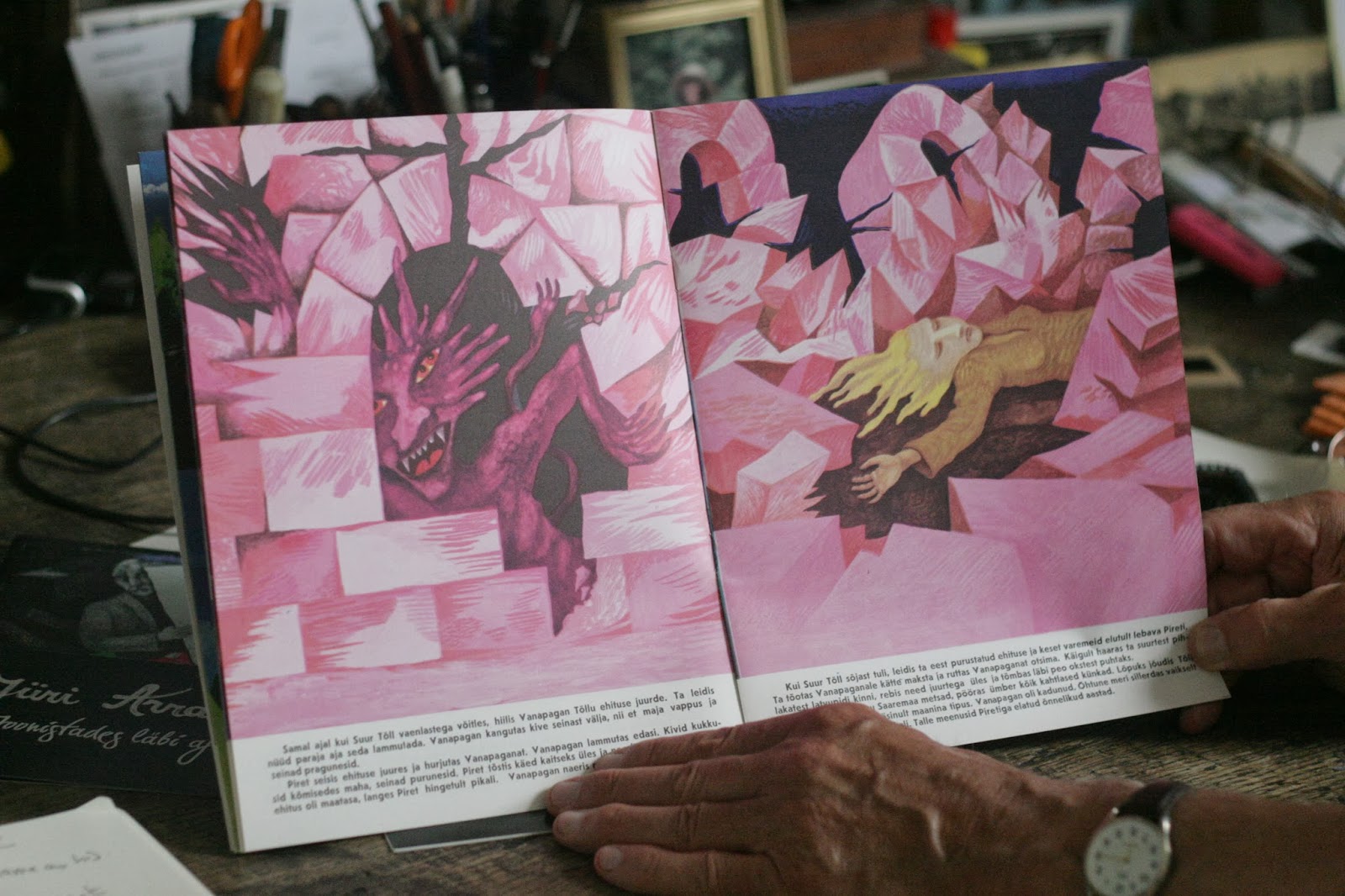 Jüri and I talked about a number of topics, including his passion for filmmaker Bergman as well as writers such as Dostoevsky, “I love Russian emotion!” he enthused.

As we chatted he busily unearthed numerous prints, paintings and sketches from his vast and carefully kept archives to show me; he has exhibited all over the world consistently since the 1970’s and enthusiastically showed me various newspaper cuttings and exhibition catalogues about him from over the years.

Many of his later works have the same fantasy elements, but depict battles, slayings, apparitions and mythological looking figures.  Curiously I talked about similar imagery on the Soviet pin badges I found in Tallinn in my last post; they also featured dragons, wizards and images of powerful beings. 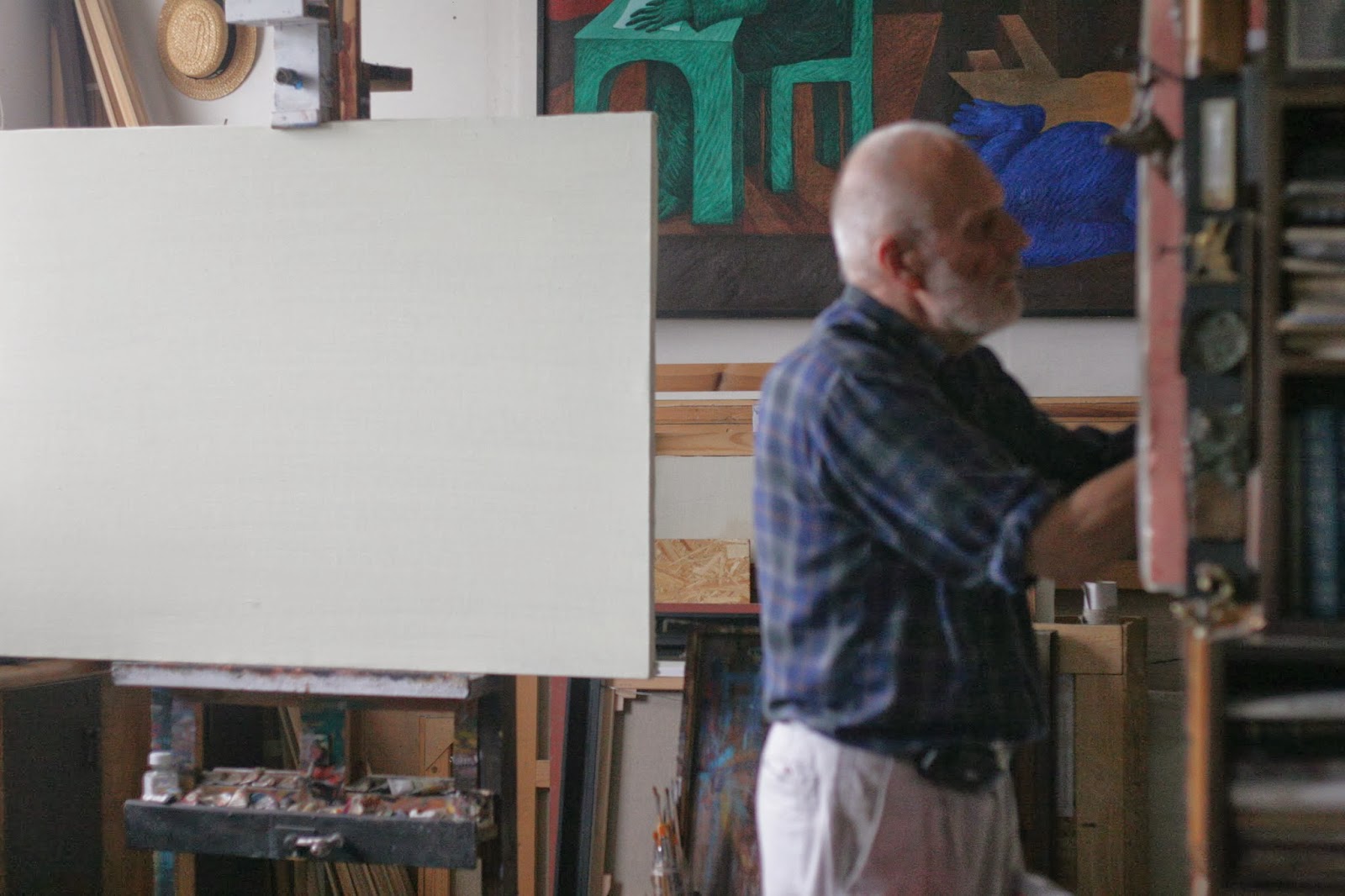 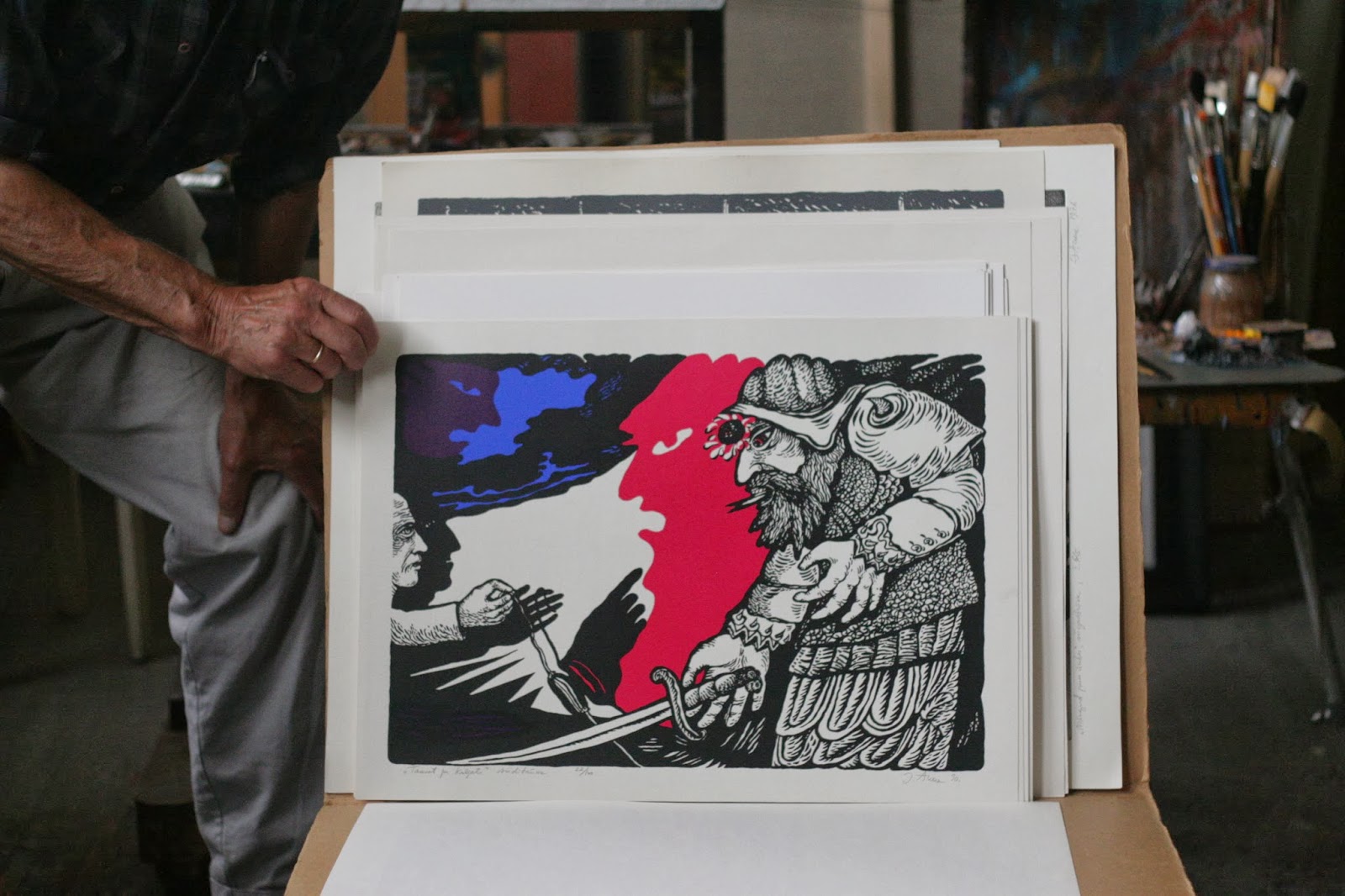 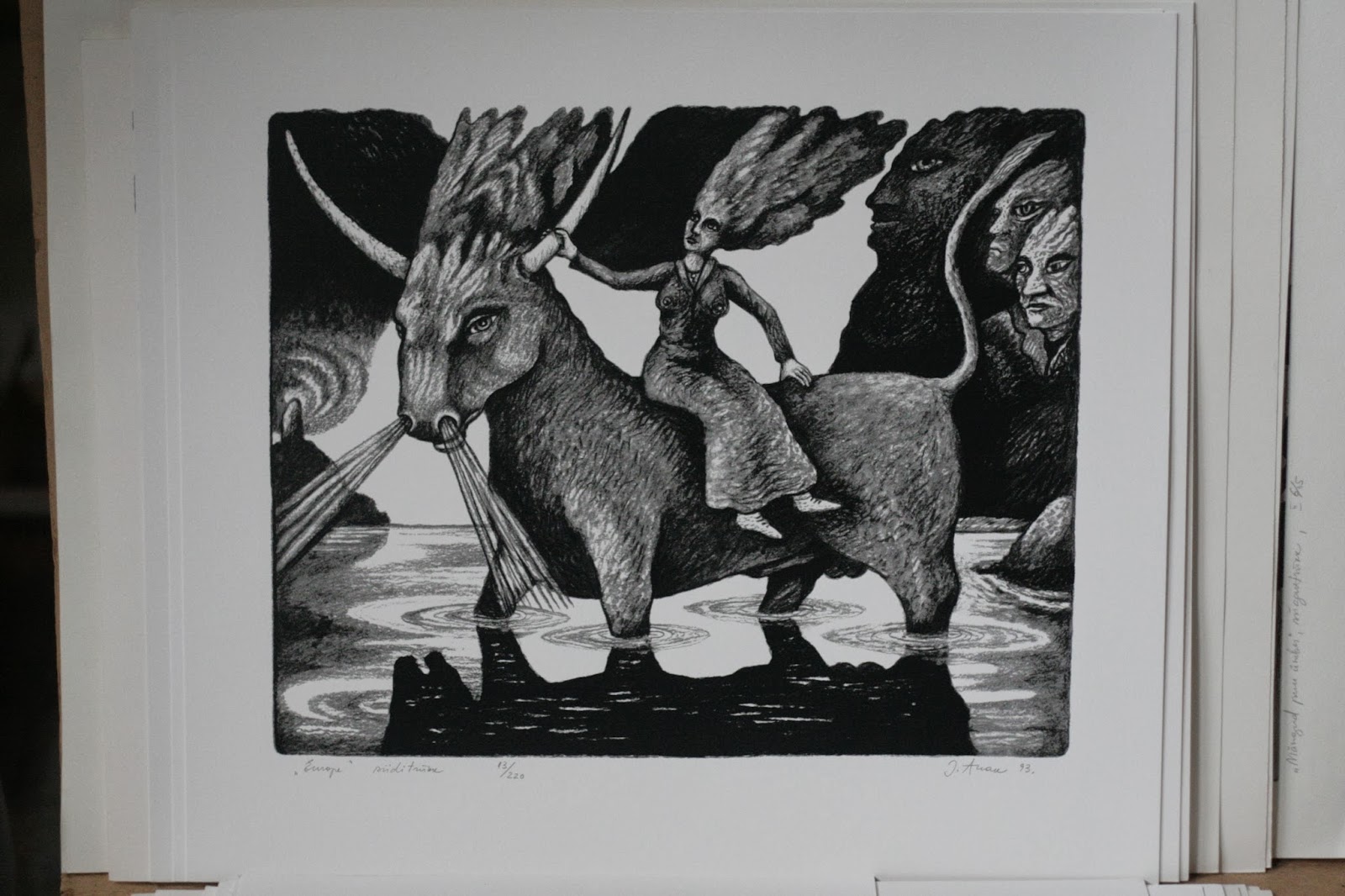 Some also bordered on a little bit menacing 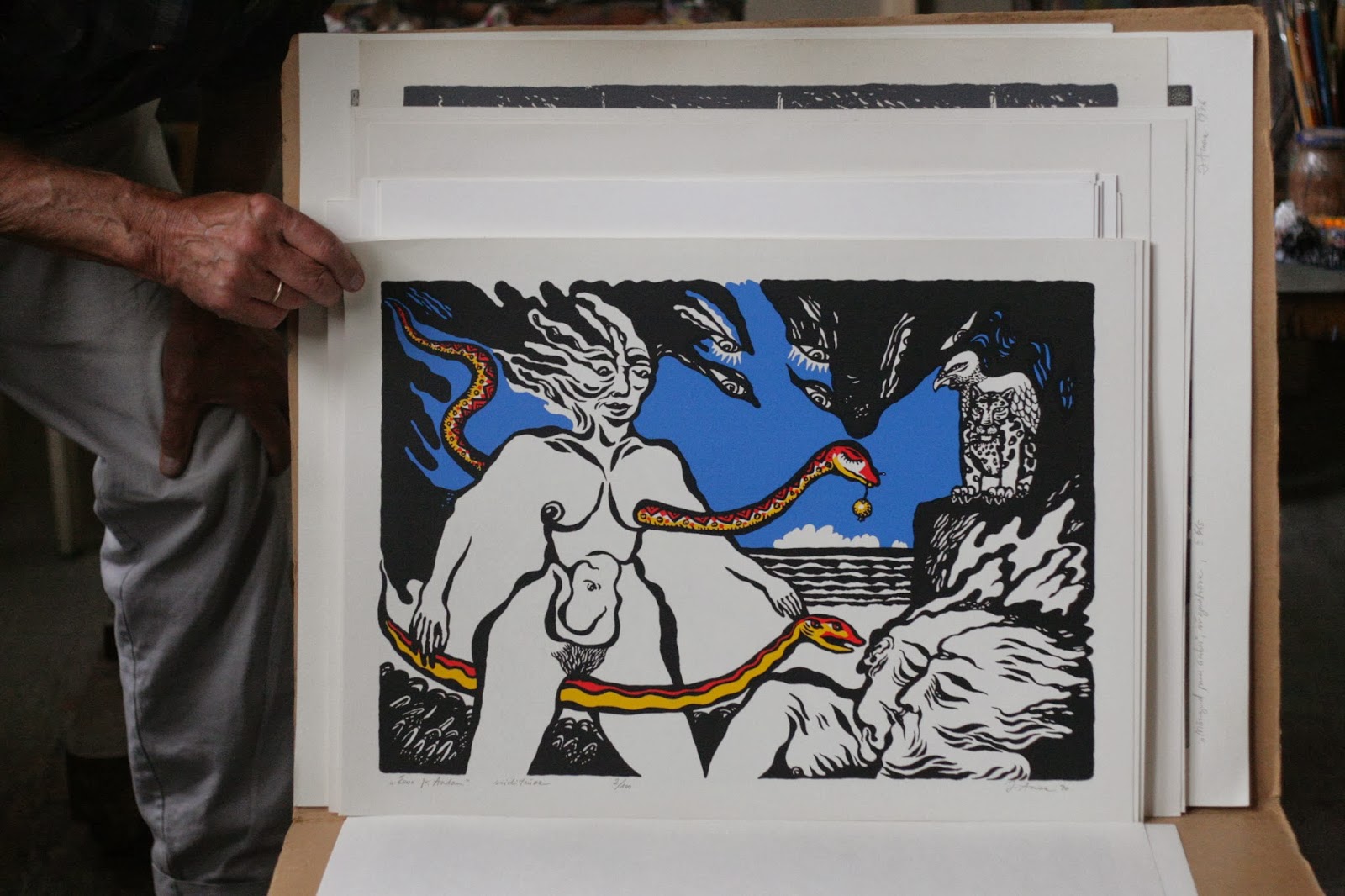 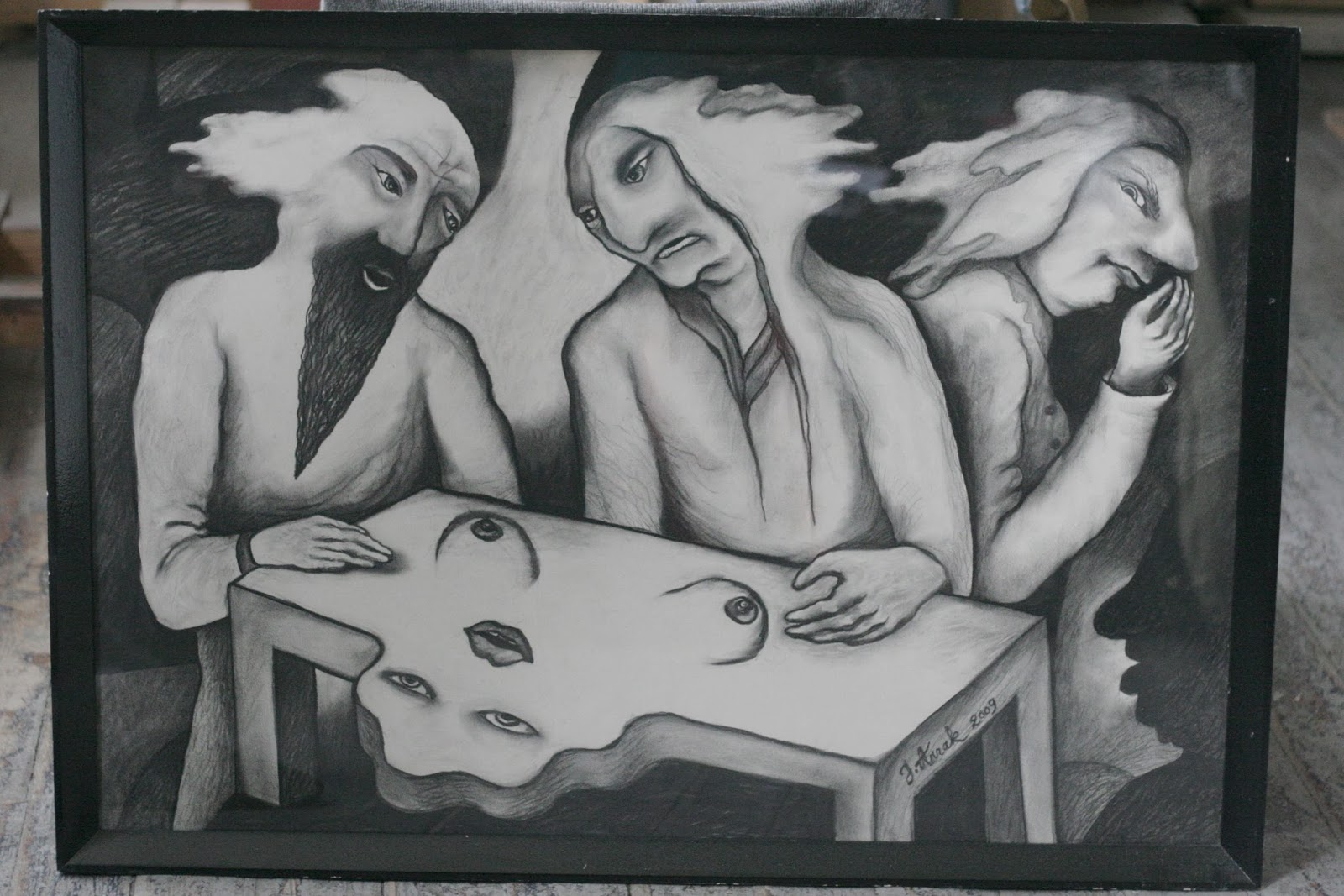 With the amount of iconography in his studio, it was natural we talked about religion.  Jüri likened belief systems to ladders reaching to the skies, searching for meaning, “The problems come when people think, ‘My ladder is better than his!'” he declared.

He also handed me a book of his own philosophical essays to read, in order, he said, for me to properly understand what was behind his work.  Exploring themes of consciousness and metaphysics with a healthy dose of 70’s mysticism, it was obvious to me that Jüri was quite a spiritual, questioning kind of person, and I wasn’t suprised to learn from other sources later on that he helped introduce strands of Buddhism to Northern Europe.

I was really tickled to find this picture of him after our meeting, dating from the late 70’s and looking like a bit of a bohemian maverick, it made me wish I’d met him back then too, whilst possibly wearing a great kaftan.  I got the sense I only really scratched the surface of his life stories, and that he had been a pioneer in all sorts of ways. 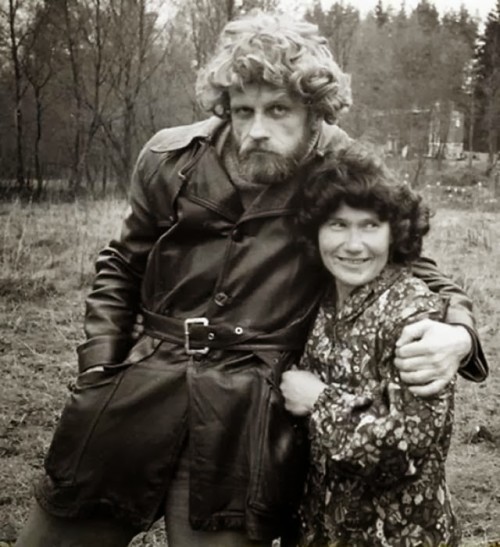 Now married to his third wife “I am an artist you know” he shrugged by way of explanation, Jüri’s energy and playfulness really fascinated me – he explained that he doesn’t ever think about age, or what convention dictates he should or shouldn’t be doing.  We talked about retirement and he insisted he would keep on going to his studio every day as long as he could do because “everyone needs a problem to solve.”

We finally bade farewell and he left me with a bundle of books, exhibition catalogues and postcards, which he kindly signed for me; drawing a weird star eye, which he said was there to bring me good luck. 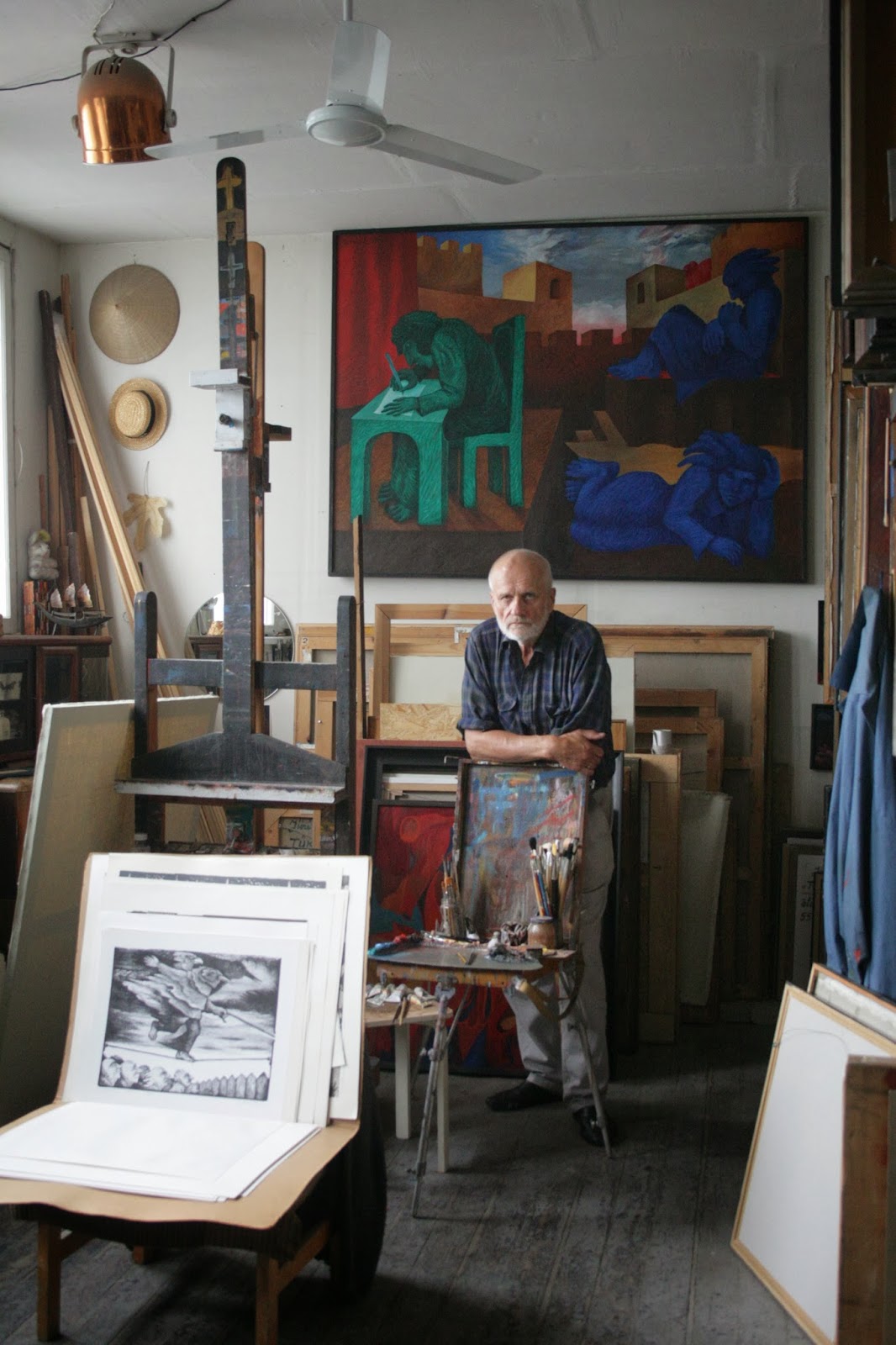 I left feeling so invigorated and full of ideas after meeting Jüri – learning about his massively productive creative career, his independent and nonconformist spirit, innovation and determination to create for years in such a restrictive environment was inspiring, and humbling, and I was charmed by his age defying mischeviousness, eccentricity and charisma.

I really hope I’m climbing 110 steps to a magical creative hideaway every day when I’m 77, creating psychedelic worlds, in fact I might make that my goal – Jüri is now my blueprint for youthful older age.