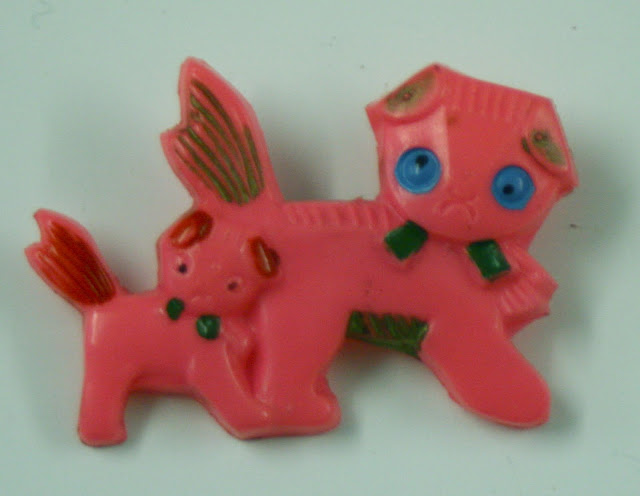 This 60’s plastic uber kitsch Japanese brooch is one of my favourite ever finds. I haven’t yet featured jewellery on here, but I come across all sorts of wild and oddball brooch designs as a dealer, particularly from the 1930’s and 50’s where bright colours, plastic and strange animals were the order of the day. I will post more of these soon as I think this area of design can sometimes be overlooked.

This brooch is interesting since it seems to mirror the aesthetic of the sorts of characters and animals drawn by old Japanese masters such as Utagawa Kuniyoshi which quite clearly pre-empted modern day manga, yet it also seems to be an earlier example of the now hugely pervasive trend towards ‘kawaii’ or cute things in Japan.

It’s apparent that the 1950’s in general saw a rise of very innocent, childlike, wholesome and playful imagery throughout illustration, jewellery, textile and product design. Cute looking animals and whimsical scenes grace all kinds of items from the post-war period, an understandable trend given the sombre mood of the years previously.

It’s intriguing however that in most countries this subsided, but in Japan it only seemed to multiply, where today it’s normal for many drab corporate companies to have a colourful ‘kawaii’ character as their logo, serious businesswomen are happily seen with a bundle of small rabbits hanging from their mobile phones, men in their forties own Hello Kitty memorabillia and the cult of cute is bigger than ever. After living in Japan for a while from 2004-2005, it did make me wonder if this might be an indicator of the sort of indelible mark the atomic bomb might leave on a country’s psyche – propelling it permanently into a regressive and childlike state where things that are safe, sweet and unthreatening are ultimately very attractive.

This was found in a shop in Koenji, an area of Tokyo with a vibrant live music scene and a mass of vintage shops selling some really quirky items (although I did find a Mr Blobby annual in one which was alarming – I think they thought he was ‘kawaii’ too) 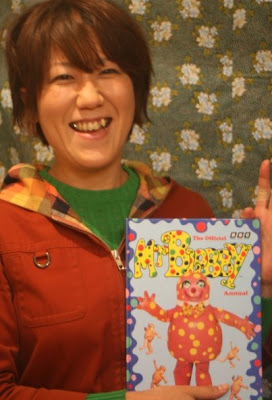 This entry was posted in DESIGN. Bookmark the permalink.