I’ve been meaning to post some examples of striking vintage fabric design for a while – I come across all sorts of textiles with some really far out and abstract designs, yet it still seems to be an area of design not documented or celebrated as much as perhaps book, poster and furniture design tends to be. 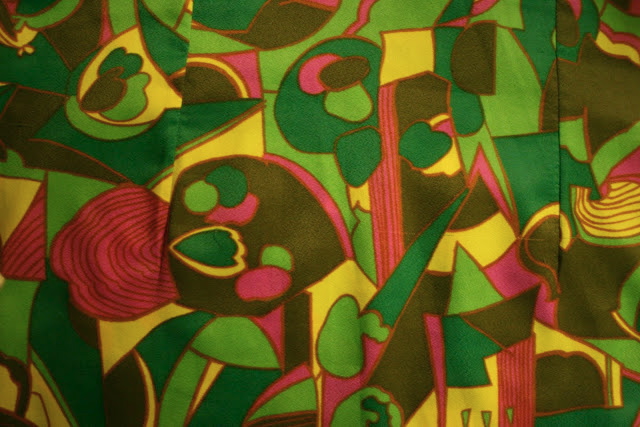 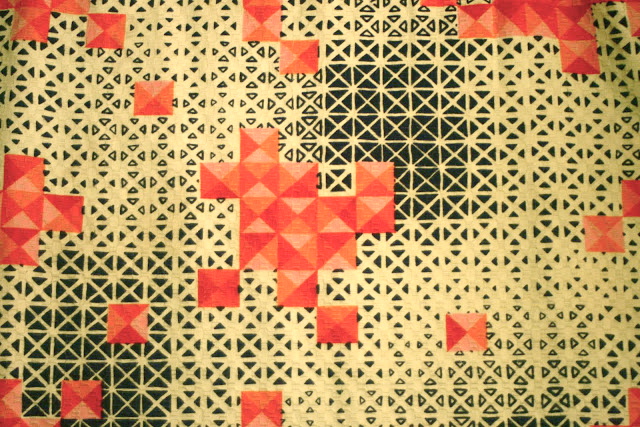 The patterns above are all from clothes from the late 1960’s and early 70’s – obviously a time of extreme colour, psychedelia and generally altered states, all of which were clearly at play when these fabrics were produced.

More than one of the designs seem to depict a sort of utopia or a sense of exotic otherness which again is clearly representative of the mind set of that period – with people en masse seeking enlightenment and escapism through hallucinogenics or New Age religions.  I personally would love to find a tablet that would allow me to visit the pink mountainous wonderscape in the third image (part of a dress designed for Liberty’s) – it has a fantasy element that reminds me of a tripped out Mordor from Lord of the Rings.

The first image also looks a lot more modern and almost computer generated which is why I picked it up, and I thought the faceless oompa loompa types dancing around on the last pattern were too disturbingly beautiful to not purchase.

All great expressions of the Age of Aquarius – I will be posting more fabrics in future as I think there are some really special / weird patterns around that should be enjoyed.

(These were found all over the place…Image 1 and 5 are part of a skirt and dress found in Osaka, Japan.  The pink tree pattern is from a top found in North London, the abstract geometric things happening in image 4 are on a huge kaftan found at the Mauerpark flea market in Berlin, and the Liberty mountain dress was found at a market in London)

PS. I am off on a trip to the Ukraine this week, it’s currently minus 7 and heavy snow so am packing various fake fur layers that will make me look like a Russian oligarch. They do have a book flea market there though so am hoping to bring back some oddball Eastern things to feature next time.

This entry was posted in DESIGN, FASHION & TEXTILES. Bookmark the permalink.